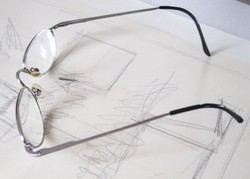 Art Historical Reflections, issue 2: British reactions to Von Schwaben’s Theory of Physical Determinism as prime mover of innovation in art. Sir Craigh Cleavens, Head of the Department of Oriental Art of the Courtauld Institute of Art, London, U.K., holds that innovation in art is by reason and experience and not by any kind of defect, be it physical or mental. 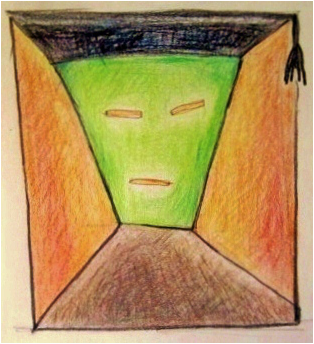 Sir Craigh Cleavens graduating in Oriental Studies. Drawing by Alias O. Teur, 2012.
The controversy sparked of by Von Schwaben’s Art Historical theories, and in particular his predilection for physical or, more precisely, bodily determinism in the development of (Western) art have reached unprecedented heights now that the prestigious London based Courtauld Institute of Art felt it should make its well considered stand known. Resident professor Sir Craigh Cleavens, spokesman of the world famous institute, is mostly known for his extensive studies of shadows in the baroque style of painting; an effort which culminated in his classic Shadows in the Dark (Winsor Press, 1989). In this landmark opus he traces the shadows in baroque painting back to the influence of early Middle Eastern mystery cults on Greek philosophy. (Dear reader, more on this at another occasion, intriguing as the subject is. For now let us first sort out the business of Von Schwaben’s theories).

Sir Cleavens critically observes that, in line with Von Schwaben’s thinking, the theory of physical determinism equally well might be applied to scientists, including art historians. He notes, not entirely without malice, that, in this line of thinking Newton formulated his law of gravity because he fell out of a tree as a child; that Archimedes thought of the Law of Archimedes because he slipped on the marble bathroom floor causing him to splash into the bath; that Einstein’s Theory of Relativity must have been inspired by the dizziness Einstein experienced when swirling in the merry-go-round; and that Darwin’s Theory of Natural Selection sprang from the sexual deprivation Darwin experienced during his expeditions at sea.

He asks, in his delightfully civil manner, what ailment or trauma it is that made Von Schaben formulate his theory of physical determinism. Is it, perhaps, he ventures, because Von Schwaben perceives of himself as a nobody? And then, he continues, if it is an ailment that lead to the formulation of the theory of physical determinism in art, what confidence should we have in it? Why not look closer home, at this side of the Channel, at the great philosophers that this great nation has brought forth? Hobbes, Locke, Hume, well eh, and Russel, he added somewhat reluctantly. Might they not provide the answers, or at least ideas for answers about what gives rise to innovation in art?

Let us, Cleavens proposes, for example, examine the work of our great painter Turner. It is well known that Joseph Mallord William Turner changed the art of landscape painting and took it to unprecedented lucid heights. There has been no master before or after him who made you feel that you could almost touch the light that shaped the objects he was rendering. Now, why and how did Turner develop this outstanding ability? Because  he grew up as a child in a small room? Or does his virtuosity in rendering light emanate from the dreadful darkness of an English winter? Nonsense! Turner was not only a brilliant painter, he also was a rational man. A man shaped by Locke and Hobbes. Like most of us British. Yes, we are not only rationalist and realists; we are also clever and practical men, taking experience as our master. Turner, Cleavens explained, did two things to achieve his unrivaled luminescence in oil painting. He studied the Dutch masters before him, such as seascape painter Willem van de Velde (Jr.), and he used water colour techniques in oil painting. He applied oil paint as a thin wash, as is done in watercolour, to achieve incredible yet real luminosity. When you start painting seascapes it is only rational to look at worthy predecessors; and his innovative use of glace in oil painting was the outcome of an empiricist, scientific approach to painting, transferring a certain technique from one field to another. Surely, Cleavens concludes "..valid reasoning from sound principle can not lead to error."

"Turner", insists professor Craigh Cleavens, "was not a sick man. On the contrary, he was as sane as a genius can be. Innovation in art is not the result of physical defect or psychic trauma. It comes about by thrift, desire and ambition; and is realized by rational, experiential, empiricist means. Let us, as the cherry in the cake, consider the case of Francis Bacon. No, not the seventeenth century philosopher and what else he was, but the twentieth century painter; arguably Britain’s greatest modern painter. Bacon, on one hand, represents all sorts of things which are British and better not spoken off, and, on the other hand, represents things so great they no longer are merely British. A despicable character indeed; a gambler, queer and a petty thief, intemperate and extravagant. Yet a great artist whose tormented soul produced works iconic of the torment inflicted on us by the very sort of society we life in. A society not natural hence creating human beings not natural; and he, Francis Bacon, developed in visual imagery the language to express these distortions, perversions and alienations. Not because he was short of vitamin A. Not because he was short of trauma of whatever kind. Not because he had too much trauma of whatever kind. No! He painted what he wanted to painted by his own volition indeed. And he did it well; and that has nothing to do with us liking him as a person or not."

Dear readers, you may gather that this is not the end of the story. There are rumblings heard in the political theatre. And professional reaction from Florence: yes indeed who would think that such an eminent centre of the study of art as the Institutio della Bella Arte, could keep quiet over such a deep issue....... We’ll keep you informed!