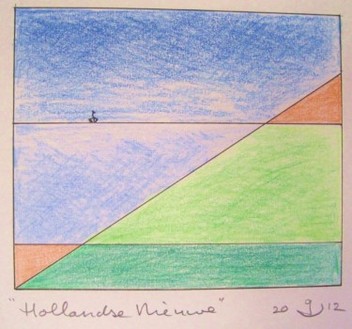 "Hollandse Nieuwe" is the first herring of the new fishing season in the Netherlands. Note the subtle inclusion of orange in this imagery that captures the arrival of the first vessel carrying the favorite maritime food of the Dutch.
The members of the Technical Committee (TC) charged with the draft of the New Protocol for the Prevention and Elimination of All Forms of Discrimination had been handpicked by the highest office in the land. All major tribes and regions needed to be represented in it and at least some of the members should not only render prestige to the Committee but also have some understanding of its content and purpose.

The appointment of Mr Sir Orange to the TC did not come as a surprise. He had proven to be an excellent Minister and clever too: under his guidance the Ministry of Fisheries and Art had prospered by the synergy of the fishing and the art business introduced by him. Never in the history of Orange County (formerly Southern Province) had so much art been produced and most of it was about fish, fishing or fish banquets. At the same time the province had never known such an abundance of fish. Fish now was privileged art subject, art object and key in the provincial food security system where it had replaced maize. “Fish is better and cheaper than maize,” argued Mr Sir Orange, “it has more protein and you do not need to build expensive structures for it. Just keep the fish in the water where it naturally likes to live. Moreover, fish is indigenous and maize is not.”

These innovations had been laid down in a bill titled “Fishing Rights and the Rights of Fish,” a document that clearly demonstrated Mr Sir Orange’s legislative abilities. Lastly, Mr Sir Orange’s impeccable pedigree provided him with an aura of in-bred leadership that could not be overlooked. The prolonged historical association of his ancestors with nobility and royalty had left marks all over the world; from carrots to oranges, from the Duchy of Orange in France to Orange Free State in the Republic of South Africa to Oranjestad at Aruba - Aruba being one of the four countries making up the Kingdom of the Netherlands, a kingdom whose kings and queens hail from the House of Orange.

The task of the TC was complex indeed and required the skills and wisdom of the best brains of the land. The country was populated by numerous tribes spread out over a good number of provinces. Customs cherished by one tribe were abhorred by another. Southerners, for example, loved eating frogs; a matter which the Westerners, mostly frogs by tribe or clan, found hard to stomach. The crocodiles of the North were in the habit of eating monkeys, a matter which all other tribes considered bad taste. And then there was the issue of the joking relationship. Westerners, believing that sometime in the past they had conquered the Southerners, were at liberty to insult Southerners at will while the reverse was not quite true. Fact is that though the Westerners were overstating their territorial conquest, the Southerners had no such claims to make at all. “Dull as the cows they like to keep,” would be an example of one of these half funny sneers Westerners could make, “or is it the cows keeping them?”  It was, indeed, a first priority of the TC to define what constituted an act of discrimination and what might appear to be such an act, but was better understood as accepted cultural practice.

One objective indeed of the New Protocol was to foster national unity while respecting regional diversity. Small wonder that cats of the caliber of Mr Sir Oranje had to be called upon to accomplish what some at the onset considered to be a mission impossible. Cynics labeled the exercise a red herring serving to steer the attention of the reformists away from issues of overriding importance such as the parceling out of licenses to investors including in national parks.

Mr Sir Orange was not deterred by such reports, reports which he labeled slanderous and not based in fact. In response he declared, “I love red herrings. They are naturally salty and have great taste. If I could I would eat a few of them every day.”


He pointed at a framed work of art in his study. “Look at this,” he said. “This image captures the return of the fishing boat with the first herring of the season – you can just see the boat at the horizon, as an omen of things to come. Yes, this work of art was made at the time the Queen of the Netherlands and myself stood in waiting for the vessel to dock after which H.M. was to inaugurate yet another herring season by the ceremonial public consumption of the first “Hollandse Nieuwe (= fresh Dutch herring). An unforgettable mouthwatering experience. And as far as foreign infestors are concerned: some of them have proven to be very good at the salaula trade or even make indigenous African polony.”