TRIANGULAR EYES / OUT OF THE BLUE 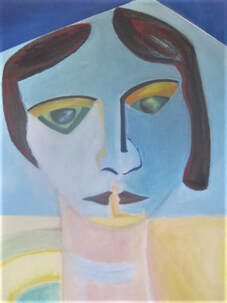 Detail of "Woman with Triangular Eyes" in the making.
​Generally it is not good practice to publish unfinished work but in this case the post is about the story of the image rather than the image itself. This canvas is large, 150 x 100 cm. Initially it had a design composed of a rhomboid, a horizon and two small female figures seated on the horizon. It had not enough substance, the painting was shelved, resurfaced and I put my mind to the imagery once more. At night I saw a triangular eyes of a young woman. I painted the face in and enlarged it into a bust which now is the centre piece of the design. The face was painted in fragments over the first coat, which was blue, the blue of the sky above the horizon. I shaded the facial blue in a few tones but it remained blue while I worked on other sections. My friend and colleague Patrick Mweemba noted that the face was quite expressive, overwhelmingly so it seemed to me and its blue appearance made me uncomfortable. In my associative network blue faces recall the supernatural, otherworldliness, a return from death. I did not want that. Spirituality is fine but in this case eeriness is not.

Painters do have a relationship with portraits they paint, be these of people real or not. In order to create the experience you have to live it and if you don’t there nothing to offer the viewer. So I sat in front of the painting and asked myself “Where does this personae come from? How did she land on my canvas? What do I want to do with her or from her?”

A solution was not immediately forthcoming but my resolve to transform her was solid. I put the painting out of sight, relocated it, put it back on the chairs I use as easels and decided I’d repaint, or over-paint, the facial blue and I did so in the past days. I retained part of the blue, as a remnant of the history of the image relevant to its present state and reworked much of the remaining surface to create an appropriate environment and context for the female bust. Though still in development the photo gives you an idea where the design is heading to.

That was not the end. I did have a response to my question “who are you?” Once more at night, as occurred with the triangular eyes, something cropped up, now a name rather than a sight. Cassandra. Who was and is Cassandra? Cassandra, you’ll find on The Net, was the daughter of King Priam of Troy. Her outstanding beauty had moved the Greek god Apollo, god of poetry and other things, to endow her with the gift of prophecy and foresight. His gift was not returned the way he desired – she rejected his call for love. In angry retaliation Apollo cursed her, the curse being that her prophecies while true were not to be believed.

Now how to interpret her  spontaneous appearance in my painting? An omen? Of what? Or just my imagination at work? Time will tell…… 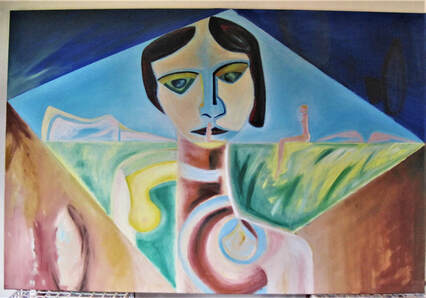 "Woman with Triangular Eyes" in the making. Oil on canvas, 150 x 100 cm.
One thing this adventure did was to give me an idea - a speculation it is as how to prove it? – about the reasons why in traditional African art faces are always or nearly always not individualized but standardized icons. Masks that have names and in ritual may be associated to a specific individual but exist outside these incidents permanently as personae only, like characters in a play. The individualised portrait (mask, sculpture) is felt as to be an intrusion or capturing of the portrayed person and such immediate link may easily be abused. There are other reasons as well that one might think of. There is a certain economy in working with a limited number of iconised portraits rather than with an unlimited number of individualized ones suited for one setting only. But then, if you look at the best of portraits in western art you see that each one of these has become iconic, transcending the specific to the general, no longer standing exclusively for an individual but for a character or personality.

​The author is an artist/anthropologist/internet publicist working in Zambia.